Hamstrings: Why You Should be Training Them More

Body Complete Fitness Solutions/BC MAG/Fitness/Hamstrings: Why You Should be Training Them More 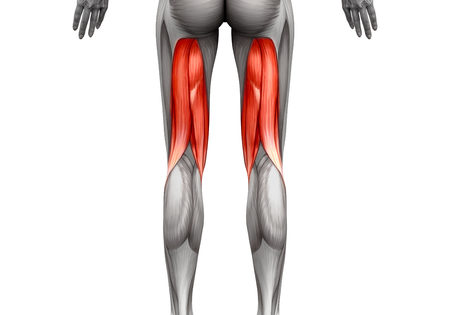 This article will give a comprehensive overview of the hamstrings muscle group, discussing their anatomy, functions, why they are important, some common issues, as well as how to correct them using strengthening and mobility focused exercises.

Hamstrings: Why You Should be Training Them More

Before we can discuss the importance of the hamstrings, as well as how to strengthen and correct common issues, a brief anatomy lesson is important to be able to understand how and why these things are happening.

All three hamstrings originate at the ischial tuberosity, which is the bony prominence in the lower portion towards the centre of the buttocks. If you’ve ever heard the phrase “having a bony bum”, that’s the ischial tuberosity. However, they differ in where they insert, and as such, their functions change slightly.

What do they do?

As a group, the hamstrings are responsible for extension of the hip, and flexion of the knee. Or, to put it more simply, they bend the knee, and straighten the hip. However, due to their differing insertion points, some of their functions differ.

The biceps femoris is responsible for flexing the knee, laterally rotating the knee
(when flexed) and hip, extending the hip, and tilting the pelvis posteriorly.

The semimembranosus and semitendinosus are also responsible for flexing the knee, extending the hip and tilting the pelvis posteriorly. However, they are different from the biceps femoris as they medially rotate the knee (when flexed) and hip (2). 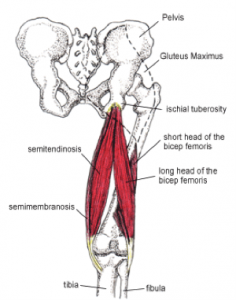 Why are they important?

Having sufficient hamstring strength is vitally important for a number of reasons.

Firstly, injury prevention. An injured athlete cannot train, and as such, cannot improve their performance. The hamstrings play a key role in stabilising the knee joint, as well as maintaining hip and torso positioning. Without sufficient hamstring development, which often comes alongside over-developed quadriceps, injury risk to the knee joint as well as the hamstrings themselves is greatly increased.

In recent studies, improved hamstring strength has been shown to reduce injury risk, as well as increasing deceleration ability (1,5), which may be due to their role in maintaining torso orientation and mediating control of the body’s centre of mass (4). For anyone who runs, or plays a sport where you are required to slow down and change direction, this is important. As well as this, hamstring injuries often occur during high velocity running due to how rapidly they must decelerate the lower leg as it swings through prior to taking the next step.

Secondly, performance. Due to their role in hip extension and knee flexion (2), they are among the muscles responsible for our ability to run fast. Alongside the glutes, they help to push the body forward as you run by extending the hip joint. They are also important for deceleration. The stronger the hamstrings are, the faster you can stop and change direction, a critical component of sports performance.

Thirdly, for everyday life and activities. Whilst preventing injury and improving performance at your chosen sport or hobby is important, the ability to perform everyday tasks more easily and to be able to move better is vital. Due to their role in hip extension and maintaining torso and pelvis orientation (2,4), greater hamstring strength will allow for improvements in posture, alongside making tasks such as standing up from a chair, climbing the stairs, or bending over to pick something up much easier.

Common Issues and How to Correct Them

The most common issue with this muscle group which seems to plague the majority of the adult population are tight, inflexible hamstrings. Many people perform endless hamstring stretches, day in, day out, and yet still see no progress. Whilst static stretching has its place and can be useful in increasing range of motion immediately after stretching, it will not provide long term improvements. Secondary to this, within those who participate in sport or exercise, are reoccurring hamstring injuries. Fun fact, hamstring injuries accounted for 15% of all injuries in the 2016-2017 premier league season alone! So this issue goes all the way up to the highest professional levels of sport.

The human body’s neuromuscular system will always attempt to protect itself from injury. One of the ways in which it achieves this is through making muscles feel “tight” or “stiff”, reducing the range of motion at the joint. This is also why the body stiffens up around the area when there is an injury. However, very rarely will this “tightness” be due to a physical shortening of a muscle, it is simply the brain not allowing the muscle to stretch further, due to weakness, instability and thus risk of injury.

Thankfully, both of these issues can be helped through the same intervention: strength!

Training the hamstrings directly is vitally important, as a growing body of research is showing that traditional lower body exercises such as squats do not improve hamstring size or strength (3). For example, a study published this year by Kubo, Ikebukuro and Yata (3), examined the effects of full depth squats vs half depth squats on lower limb muscular development. They found that the glutes and adductors grew significantly more during full depth squats, and the quadriceps grew the same amount in full squats and half squats. However, the hamstrings grew less than 1% in both conditions. Everybody should be doing squats, they are a fantastic movement… But not for hamstring development.

The Nordic hamstring curl works the hamstring eccentrically, and is extremely good at improving hamstring strength and reducing injury risk. This exercise should be a staple movement in all training programmes. In a recent study, it has been shown to decrease hamstring injury rate in footballers by up to 51% (1). In order to do this exercise, you will likely need a partner, and may want some padding to kneel on.

First, take a kneeling position with hips extended and torso upright. The ankles should be dorsiflexed (foot pulled up towards the shin). Your partner must then press down firmly on the back of the legs, just above the ankle. Whilst keeping the hips near full extension, extend at the knee and resist falling for as long as possible. Place the hands on the floor to catch yourself, and push back up to the starting position.

Hamstring curls are a staple hamstring exercise, and can be completed on a machine, using cables, bands or sliders. This variation utilises an exercise ball in order to add instability to the movement, whilst also integrating the core and stabilising musculature.

To do this exercise, take an exercise ball and lie supine on the floor with arms extended for balance, with the heels and lower calves resting on the ball. Engage the abs and glutes to lift the hips up from the floor, creating an inverted plank position. Whilst keeping the abs and glutes engaged, toes pointing towards the shins, flex the knees in towards the hips until the hamstrings are fully contracted. Pause briefly before slowly straightening the legs again. 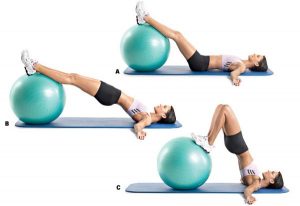 This movement is similar in nature to the exercise ball hamstring curl mentioned previously, however no equipment is needed. You will need a relatively slippery surface, socks on a wooden floor work well, or alternatively there are “core sliders” available at BCHQ.

Begin by laying supine, arms extended, with the knees bend and heels tucked towards the buttocks. Engaging the core and glutes, lift the hips into a glute bridge position. Lift the toes to point towards the shins, and slide the heels out as the knees extend until the legs are straight. If strong enough, you can then curl the heels back in to the starting position. If not, once the legs are fully extended, relax back onto the floor and reset before performing the next repetition.

There are a number of variations to this exercise which can modify the difficulty, or emphasise different muscle actions. If wanting to overload the eccentric component, you can slide down using only one leg. Alternatively, if no slippery surfaces are available, you can do the “hamstring walk” version, where you take as many small steps as possible before the legs are straight (at least 20 steps), before walking the heels back in again. 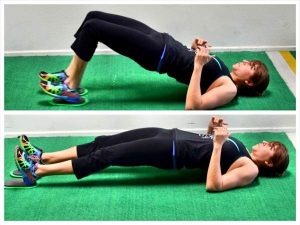 Similar to a conventional deadlift, the RDL focuses on strengthening the hamstrings and glutes in the hip extension functions. A barbell, kettlebells, dumbbells, or bands can be used to do this exercise. Stance can also be modified to a split stance, or single leg to alter difficulty and focus.

First, stand up straight with whichever implement you are using. Maintain a neutral spine, with the core braced and back extended, and bend the knees slightly (approximately 10-20°). From here, push the hips backwards as far as possible as the torso hinges forwards. Depending on mobility levels, the end range of motion for this movement may vary from mid-thigh, to touching the floor. Once a stretch is felt in the hamstrings, pause briefly before pushing the hips forward in order to stand up to the starting position.

It is important to note that the knee angle should not change during this movement, and that focus is paid on driving with the hamstrings and glutes to stand up straight again, and the back extensors are used as little as possible. The toes can be elevated on small plates to help if the movement pattern or “feeling” the movement is difficult. implement a longer pause at the end range of motion to increase the strengthening effect at this position. 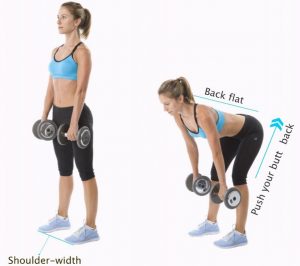 By utilising an extended isometric hold, this exercise increases the hamstrings time under tension, which can aid in hypertrophy and strength development. This exercise can be completed using a machine, bands, cables, or dumbbells.

While laying prone on the floor or a bench, attach the implement around the ankles with legs straight. Whilst keeping the core engaged and hips pressed down, pull through the heel to flex the knee, bringing the heels towards the buttocks. Pause at the top of the movement before slowly lowering back to the start position. If using a dumbbell, place the dumbbell between the feet and curl from there. 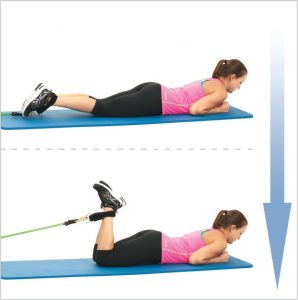 There are a plethora of other great hamstring exercises which can be used for a wide variety of training purposes. However, these five require little to no equipment, and are great choices for improving strength and mobility. If you have any questions, please do not hesitate to ask in the gym or send me a message.