HIIT is changing the way we work out: Here’s the science behind why it works

Body Complete Fitness Solutions/BC MAG/Fitness/HIIT is changing the way we work out: Here’s the science behind why it works

If you’ve been to one of our BC4X or BCSP fitness classes lately, then there’s a strong chance that you did HIIT, even if you didn’t realise it at the time. “The best way to explain it is repeated bouts of high intensity followed by a bout of recovery,” says Tom Cowan, an exercise physiologist at the Centre for Human Health and Performance (CHHP).

What is HIIT and what does it do?

HIIT is highly adaptable for varying fitness levels and goals, which partly explains its popularity. It can be performed on gym equipment such as static bikes and rowing machines (cardio HIIT), or via exercises such as press-ups (bodyweight HIIT).

The welcome news is that HIIT has been shown to improve fitness, cardiovascular health, cholesterol profiles and insulin sensitivity, which helps stabilise blood glucose or sugar. HIIT also reduces fat – both abdominal and the deep, visceral kind that engulfs your inner organs – while maintaining muscle mass or, in less active individuals, increasing it.

More strikingly, HIIT effectively halts ageing at the cellular level, by increasing the production of proteins for the mitochondria, your cells’ energy-releasing powerhouses, which otherwise deteriorates over the years. Other forms of exercise such as strength training do likewise, but HIIT is more effective. Muscle cells, like those in the brain and heart, wear out and aren’t easily replaced, so if exercise prevents deterioration of mitochondria in muscle cells, or even restores them, then it likely does so in other tissues too.

Similarly, HIIT beats continuous moderate-intensity exercise when it comes to releasing brain-derived neurotrophic factor (BDNF), a protein that protects nerve cells. This promotes plasticity (the forming of new connections, which aids learning and memory) and may even help regulate eating, drinking and body weight.

Perhaps HIIT’s biggest selling point is its efficiency: a workout can last up to an hour, but it can also be completed in 20 minutes or less. Tabata, one of the most well-known HIIT protocols. So if nothing else, it’s convenient: one of the most-cited obstacles to physical activity is lack of time. It’s appealing to a lot of people, as opposed to having to jog for an hour in the park, which is a bit more monotonous.

This variety is what makes HIIT so impactful. Because you get the rest between every work interval, you can spend more time doing each one at a higher intensity, which you couldn’t sustain otherwise. If you do 10 two-minute work intervals, you’ve actually managed 20 minutes.

Ramping up the intensity forces your body to tap into its anaerobic system for energy, because it can’t supply the oxygen required to work aerobically quickly enough; in the recovery intervals, your body reverts to its aerobic system. As the session goes on, your body relies less on the anaerobic system, because quick-release energy sources of phosphocreatine and glycogen (glucose stored in your muscles) become depleted. Your body will therefore start to rely more on the aerobic system, which releases energy more sustainably but slowly from fat. You won’t be able to achieve quite as high an intensity as you could at the start, but the upshot is a double whammy. “You’re essentially using a mixture of the anaerobic and aerobic systems, so you get an improvement in both,” says Cowan.

Respiring anaerobically has positive knock-on effects. “It’s like when you’re puffing and panting after running for a bus, you’re trying to repay the oxygen deficit,” says Cowan. This excess post-exercise oxygen consumption, which is more pronounced with HIIT than continuous exercise, burns a further 6 to 15 per cent more calories as your body replenishes itself.

Lactic acid and hydrogen ions produced during anaerobic respiration have to be cleared, as do hormones such as adrenaline; your body temperature and heart rate also need bringing back down: “All of those things increase the workload following the exercise.” Workload is one of the reasons why we’re not all doing HIIT all the time: you have to recover adequately between sessions.

If you don’t sufficiently replenish your glycogen after HIIT with quality carbohydrate sources, you won’t be able to achieve a high-enough intensity in subsequent sessions. “And, actually, diet in combination with exercise is what’s really going to help with fat loss,” says Cowan. “It’s no good training like this and eating rubbish.” Bodyweight HIIT meanwhile will, like other forms of resistance training, cause micro-tears in your muscle that need time and protein intake to repair. Research recommends 60g of carbs with between 10g and 20g of protein post-exercise to optimise glycogen synthesis.

HIIT is considered safe for most if correctly prescribed, although it may raise coronary risk for sedentary people. But Cowan stresses that you should consult a doctor if you’re new to exercise or have any kind of clinical diagnosis. He also recommends starting off with six weeks of continuous, lower-intensity training before transitioning to sessions of three to four moderate-intensity reps.

Even when you can manage sessions of six to 10 reps at high intensity, you should offset them with continuous lower-intensity sessions, plus strength training to maintain muscle. We advocate no more than 30 to 40 minutes a week above 90 per cent of your maximum heart rate to prevent injury, weakness, tiredness, illness, disrupted sleep and low mood.

Another risk with HIIT is that it’s perceived as an easy option when it’s not. “You’ve really got to push yourself,” says Cowan. “It’s not that enjoyable for some people.” That said, HIIT has been rated in some studies as more enjoyable than continuous vigorous and even moderate-intensity exercise. That might be because it’s less mind-numbing. HIIT releases more painkilling endorphins in the brain. This negates the negative feelings and enhances motivation more than continuous moderate-intensity exercise.

Finally, while short workouts sound enticing, and remove the excuse of lack of time, they may give the impression that only a little exercise is necessary when most people should be getting more, not less. HIIT gets the arduous exercise out of the way quickly, not so you can put your feet up, but so you can enjoy more activities that feel less like hard work. 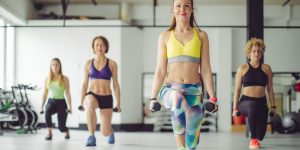