The Force-velocity Curve: Why it’s Important to Understand 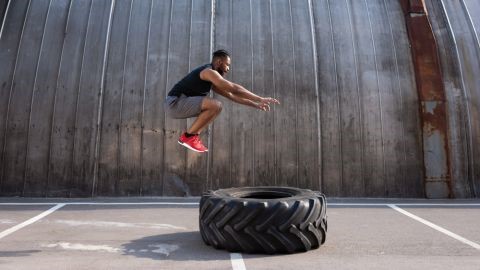 As we move into the New Year and get stuck into training with the new five pillars of fitness, the force-velocity curve is a piece of theory to have in mind when performing exercises. This simple, yet very important concept has guided parts of our programming for the New Year. If used correctly, you will be able to get better results from your training!

For more information or detail on the points mentioned throughout this piece, have a read of the references listed at the end of the article.

What is the Force-Velocity Curve?

The force-velocity curve may sound complicated, but it is actually very simple to understand. The force-velocity curve is a physical representation of the relationship between force and velocity, and can be displayed on a typical x-y graph (2; see image below). The x-axis shows velocity, or the speed of a movement measured in metres per second (ms). The y-axis shows force, or the amount of ground reaction force produced, measured in Newtons. Force is often synonymous with how heavy the weight being lifted is.

The curve indicates that the higher the force required, a decrease in velocity will be seen. For example, a 1 repetition maximum deadlift would require very large forces, but is an incredibly slow movement. On the contrary, sprinting or jumping require less force production, but is performed at maximum velocities. 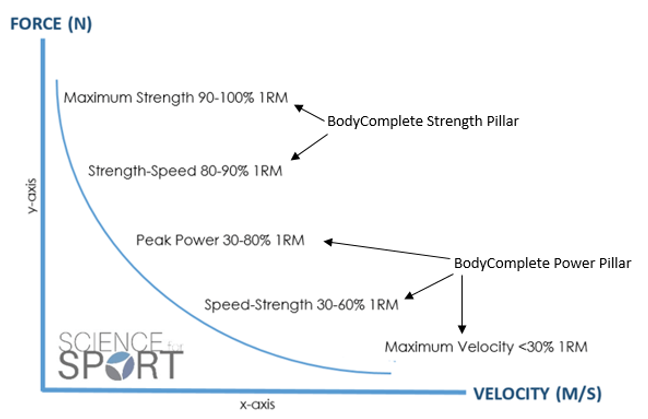 Why is this Important?

When looking to improve fitness and perform better, it is important to train through all parts of the force-velocity curve. By only training one part of the curve, it is likely an athlete’s performance will only improve in that section. For example, only training maximum strength may lead to improvements in force production, but could also lead to a reduction in the speed of contractions (2). By training all aspects, the objective is to shift the curve to the right, meaning heavier loads can be lifted at greater velocities, increasing power production and explosiveness. Training programmes which combine strength and power training have been repeatedly shown to improve performance more than strength or speed training alone (1), which is why two of the new five pillars of fitness in the BodyComplete programme include strength and power.

The force-velocity curve demonstrates a simple inverse relationship between force and velocity – meaning an increase in one results in a concurrent decrease in the other (2). This has strong implications for planning training programmes. On a more individual level, the importance of intent when performing exercises is incredibly important. When looking to improve speed, the velocity of the movement is crucial. If looking to improve strength, then the load used becomes key.

As we begin the New Year and get to grips with the new five pillars of fitness, it is important to keep the force-velocity curve in mind when training. By doing this you will be able to improve your strength, power and fitness, and get better results!